Hello all. I'm sorry for the back and forth regarding NPR Check and NPR Team Check, but I've decided to put the Team Check blog to bed for the time being. I'm going to close down the comments for now and redirect folks to the original NPR Check site. I'll put a posting up there explaining the indefinite sabbatical that I'll be taking from the blog, and I'll open comments there for a while. I'm very grateful to all who've been involved, and have to extend a very warm thanks to GoopDoggy for the fine work he's done here. 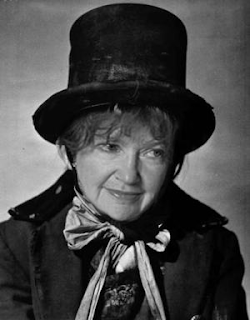 In the story of April 3rd, U.S. Tensions Rise With Afghanistan's Karzai, Linda Wertheimer chats it up with Jean MacKenzie, Afghanistan correspondent for GlobalPost:

Ms. MacKENZIE: Well, Hamid Karzai is the artful dodger of international politics and I think we've seen that very well this week. This has been his pattern for many years. His speech on Thursday was obviously geared towards the domestic audience, where anti-Americanism and anti-Westernism plays very well. [Dodge the question of why that might be so.] He is exploiting attitudes and fears, prejudices among his constituency to shore up his own political power at home, and then being conciliatory with his international partners in a different form. [Dodge the question of why that is a good strategy for Karzai.]

WERTHEIMER: One of the things that apparently he and President Obama had an unhappy conversation about was the number of relatives that he has appointed to the government and the efforts that he has made to sort of shield the warlords in Afghanistan from any repercussions for anything that they have done. [Dodge the question of how that's any different from the US Government - where seats are routinely passed to family members...my rep, for example, is Mary Bono Mack...]

Ms. MacKENZIE: That is true, but to give him his due, he's in a very difficult position. Many of those warlords and many indeed of his relatives are in close cooperation with the West and with the United States of America. [Dodge the question of how Karzai's brother is in the opium business with the CIA.]

So on the one hand, we are hammering Karzai for corruption. On the other hand, it is some of our own actions and policies that are keeping those people in power. [Dodge any specificity here.]

WERTHEIMER: To some extent, it works for us, I guess. [Dodge the question of who are "us?"] What about the reaction here, though, and among other countries that are contributing troops to the effort in Afghanistan? There were some comments after his speech in which he said there's the sort of thin curtain between invasion and assistance. People are sort of raising questions of why are we doing this.

Ms. MacKENZIE: And I think that's a very legitimate question. But we also have to realize that in terms of international commitment to Afghanistan, it's very definitely on the wane. Canada will be out by the middle of next year. The Netherlands is on its way out. There is a growing movement in the United Kingdom to get out of Afghanistan.

I think, in some cases, we are seeing the international community seizing on these statements and these actions of Karzai as a way of justifying what their policies are going towards anyway, which is getting out of Afghanistan as soon as possible.

Our national security concerns are quite small. We have broad agreement that al-Qaida is no longer a major player in Afghanistan. And we are fighting a war against the Taliban, who were not the primary movers behind 9/11. What we have is a very big political reason for being in Afghanistan. We went in there under the guise of the war on terror, but moved into nation building. Our mission has become very foggy there.

WERTHEIMER: Where do you see this going?

Ms. MacKENZIE: That's the million-dollar question or the several billion-dollar question, I guess, from the American perspective. Hamid Karzai is the president of a small, poor, very dysfunctional country who seems to have run rings around the largest economy in the world.

Ms. MacKENZIE: Because then we would have to admit that the past eight-and-a-half years have been an exercise in futility. If Afghanistan can fail with no adverse consequences to the United States, then what have we been doing for eight-and-a-half years? I think that is the political consideration. We want to get out of Afghanistan - I think that's clear. But we want to get out of Afghanistan with some sort of semblance of victory or at least achievement under our belt.

Although U.S. officials have stated publicly and repeatedly that they will neither support nor oppose any candidate, the conspiracy-happy Afghans have been watching for subtle signs like soothsayers examining chicken entrails.

But that's precisely the position Wertheimer and MacKenzie are placing their audience during most of this interview, though, I must admit, there is some shocking candor towards the end: We can't pull out of Afghanistan because that would be admitting that this whole enterprise was just foolish? That it's "good money after bad?" Really?!

Admiral Mullen declared last August that the US was basically starting over in Afghanistan and would need "12 to 18 months to turn this thing around." How is it looking 8 months later? A little ridiculous, I think. Note for example, the artless dodging of the issue of the impending conflagration in Kandahar. 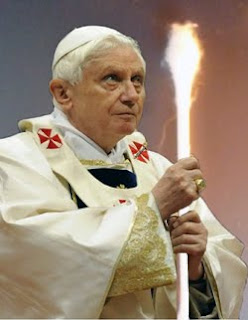 So far this "team" blog has been more of a duo effort: goopDoggy and Mytwords. We had hoped for at least 4 writers. Any takers? Email Mytwords if you're interested - click the Mytwords profile under "Contributors" in the sidebar to get in contact.

On the Ground and At Sea 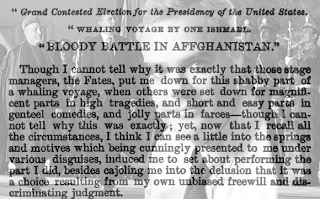 Obama visits Afghanistan as "Commander in Chief." Scott Horsley was there for the whole trip. He gives us the "highlights." Here's a bit of his nonsense coverage:

The President went into that meeting [with Karzai] determined to press the Afghan president on what he and his government need to do to match up with the military effort that the US [is] making on the ground here. Steps like rooting out corruption. Steps like doing more to root out the narco-traffickers. [..] The President was accompanied on this trip by General Jim Jones, his national security advisor who outlined what some of the goals were for the US and here on the ground he met with Gen. McChrystal [] now of course the President can talk with Gen. McChrystal via video conference and he gets weekly updates on how the US is doing with all its various efforts here in Afghanistan but this was a chance to get some on the ground intelligence and to meet face to face, both with Gen. McChrystal and with Michael Eikenberry, the US Ambassador. [] Gen. Jones says there are signs of progress here in Afghanistan, he's calling this a strategic moment [It's been six months since Jones last used that phrase, so now it's good for another go]. The battle for Kandahar will be very telling. That's what Gen. McChrystal has said will be the test for whether the strategy that President Obama has put in place is working here in Afghanistan. Kandahar is of course the city where the Taliban was born, there is still a good deal of Taliban sympathy in Kandahar and it's likely to be a bigger battle than the fight for Marjah was earlier this winter.

As cartoonish as this all seems from afar, it's oddly reverberant with the opening chapter, "Loomings," of Moby Dick. Ishmael is explaining his allure for going to sea as a sailor, in which position "head winds are more prevalent than winds from astern" (and winds from Horsley's nether parts)

so for the most part, the Commodore on the quarter-deck gets his atmosphere second hand from from the sailors on the forecastle. He thinks he breathes it first; but not so. In much the same way do the commonalty lead their leaders in many other things, at the same time as their leaders little suspect it.

Ishmael imagines his whaling story as "a brief interlude and solo between more extensive performances" such as a "grand contested election for the presidency of the united states" and "Bloody battle in Afghanistan."

The first is an allusion to the unusual campaign of 1840 where Harrison campaigned to the refrain of "Tippecanoe and Tyler too" thereby earning a 4 to 1 majority. The second is a reference to the Khoord Kabul revolt of 1841 where the Afghans killed all the officers of the British occupying army and then massacred all their retreating troops.

As Brendan Cooney noted in a Counterpunch article titled, Remember the Pequod, eight years ago, Moby Dick should be read as a cautionary tale against foolish chases. The question still rubs, now more than then: is the war in Afghanistan a (preemptive?) retaliatory venture or a commercial whaling expedition? Is it payback for Al Qaeda or a strategic foothold in the resource rich middle east? I don't know. Like most Americans, I think, I'm at sea as to why we're on the ground over there.
Posted by gDog at 10:52 AM 5 comments:

So far this "team" blog has been more of a duo effort - from goopDoggy and Mytwords. I had really hoped to get at least 4 or more writers involved. Any takers? Email me if you are interested - click the Mytwords profile under "Contributors" in the sidebar to contact me.
In the meantime, NPR related comments are welcomed as always.
Posted by Mytwords at 9:15 AM 2 comments:

The Thrill of War 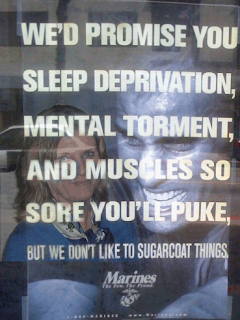 Dina Temple-Raston, author of The Jihad Next Door: The Lackawanna Six and Rough Justice in an Age of Terror was heard this ME to decry the use of secular incentives to promote jihad: Jihadi Cool: Terrorist Recruiters' Latest Weapon. She worries her audience with the thought that the appeals are "clearly aimed at young people nursing resentments and looking for thrills." I was reminded of this poster recently seen in a Long Beach window.
Posted by gDog at 2:07 PM 4 comments:

NPR related comments welcomed.
Posted by Mytwords at 4:13 AM 13 comments: