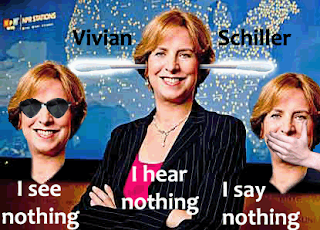 There are topics in the shadows of the Main Stream Media, of which Alicia Shepard proudly proclaims NPR is a part. On topics such as (readers may suggest more)
NPR is generally mum.

In his talk of March 3rd at the Treason in America Conference, Russ Baker addresses the issue of what happened on 9/11, "one of the greatest cataclysms in American and recent world history" and how "the media turned away from this."

Part of this was revulsion and shock to the system. To the individual system and to the body politic. It was so disturbing on every possible level that it simply doesn't compute. What happens with this kind of trauma is you just shut down. [..] It's the same for the media. It's not that the media is in cahoots or is bad or anything like that, it's just that the media is a whole lot of people trying to cope, trying to do their jobs, trying to keep their jobs, trying to stay focused and so on - you've heard the expression "too big to fail" about Goldman Sachs and these sorts of places, well this story was too big to cover.

Dramatic pause here. Which is well placed. "Too big to cover" is, in some sense, a new phrase for the "the big lie." Think of the sinking of The Maine, the attack on Pearl Harbor, Operation Gladio, the Gulf of Tonkin incident, the crack cocaine epidemic, the Niger forgeries - all these events have been exploited by opportunistic government propagandists to incite war. The instinct for it in government seems to undeniable. So Baker's assessment is fairly benign. He continues,

What bothers me about that is that no serious journalist should fail to cover [] the big stories. Somebody at the Washington Post was telling me - do you remember the couple that got into the White House dinner? Apparently they put together a team of 30 people to cover that. And this reporter pointed out to me, they said, we never had more than 3 people covering Iraq.

Journalists should always cover the big stories, and no serious journalist should out of hand reject any scenario as completely impossible or implausible, where human nature and power are concerned. It is our job to consider the evidence and to dig in.

When you look at the reporting on things that are not in dispute, it is inadequate. [] You don't have to have a position on 9/11 to want answers. And you don't have to be a kook to wonder if, when the co-chairmen of The 9/11 Commission, a commission that itself has no credibility, basically claim that they were lied to, that there might be something going on.

But, repeatedly, NPR has characterized people who want answers to these questions as kooks and conspiracy theorists. It's akin to believing in Martians and/or that the moon landing was staged in Hollywood.

One of the things you see [in totalitarian and authoritarian regimes] is that most people helped preserve the system, not because they were told to do it but simply because they were afraid. [] This exists in the most insidious form in our society where we bray about how free we are. Because if you're proud of yourself and how green your lawn is and how well you generally do investing and how cool NASCAR is [] you really don't want to hear that everything ain't hunky dory.

To what degree is NPR self-censoring? Do they know there is a cover up of some sort and so they know better than to interfere with it? Do they just not want to know what's being covered up? Or do they assume the same of their audience? Are there any dissenters? How do they justify their own lack of curiosity and failure to investigate unexplained facts like, oh, the collapse of building 7? 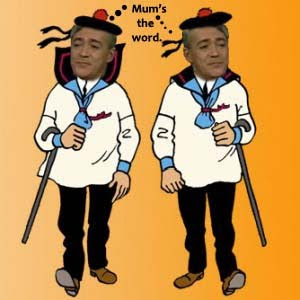 Excellent piece. While ASCE has done a review of the towers that leaves little room for debate about the cause of the failure, building 7 still remains unreported. The truly unfortunate part is that this is a distraction from the current issues that require full attention. The why in why is medical costs going up? The why in why are we hearing about SS when the budget is fine for the next two decades? The why in Iraq and Afghanistan? To get the job done? What job, how is it done?

I posted this in the most recent Q-Tips, but it applies here as well as an example of NPR taking sides with those in power. It probably falls under the propaganda and censorship headings.

The Monday morning hourly news headlines featured a blurb on Clinton and Netanyahu addressing AIPAC this week. According to NPR, part of the current Israeli/Palestinian dispute is over territory in East Jerusalem the Palestinians claim is their territory. I guess that silly UN mandate for a Palestinian nation only allows them to claim it's their territory.

Juan Cole features some maps depicting the shrinking claim the Palestinians have on their own land.

Yes, Building 7, the building owner Larry Silverstein ordered "pulled" (i.e., imploded) -- the smoking gun of 9/11. As if any but a few people care!

The government and media have colluded successfully in branding anyone who questions official versions of events paranoid kooks; even some supposedly "progressive" blogs and outlets (including Democracy Now!) forbid such questions. At least people aren't being murdered anymore (that we know of) for saying or witnessing the "wrong" things.

Is it television and consumerism that render most people content to live with the propaganda/lies about "lone nuts," "unprovoked attacks" and "fighting for our freedom"? That indifference is what keeps things humming along profitably for the elites.

Yeah, there was a purported building 7 survivor who died mysteriously a few years ago when he was trying to get his story out - is that who you mean? I forget his name. Like most people, I don't know much about all this except that the obvious, indisputable facts have not been investigated and remain unexplained.

Wow, I didn't know about that. I was thinking about the many assassination witnesses who died under mysterious circumstances.


As regards 9/11, you might find this all-purpose link illuminating:

Yeah, it's kind of like being marooned on a boat at sea: everywhere is water, but not a drop to drink.

I was thinking of Barry Jennings. http://barryjenningsmystery.blogspot.com/

NPR on Jennings:
"There were no documents that matched your search request."

"There isn't much about 9/11 that makes much sense to me." Liberality

We are socialized to "become" Americans (just like every one "becomes" something or other) and so the world would slip out from under you if you began to entertain thoughts of US complicity in 9/11 and then where would you be?

I put nothing beyond any government!